Whenever F1 comes to my mind, I tell myself, "it's not my cup of tea" and just avoid it. I don't know the details of the game, not any rule, not even the big shots of it, except Michael Schumacher, Narain Karthikeyan or Karun Chandhok (later two for being Indians). Last year when the nation was mad about its first grand prix, I was not aware of popular drivers other than these three gentlemen.

And now here I am, at Vodafone Speed Fest, 2012... where most of the guys (and galz too) have come to witness sheer excellence of Mr. Lewis Hamilton. Truly speaking I never heard of him (and that's best describes my poor knowledge) before the announcement by Indiblogger of hosting a bloggers' meet in association with Vodafone to celebrate Vodafone Speed Fest, 2012. As usually I googled and found he is one of the best drivers in F1 circuit of present time. I was amazed and logged in into Indiblogger site to register for the event. But what have I found! "No seats left". I called Punit, my blogger friend (who introduced me into this blogging world, I know he is highly irritated by now as I keep on telling this, but I will do it in future also!) and he told me he couldn't register as well. Phew!!

The next day when I was preparing for a party (one of our friend was leaving Mumbai, so it was sort of a farewell party), Punit called me. I was little hesitant when he asked me where am I. I told I cannot get out now as there is a party. Punit, more irritated by my words, expressed a mock anger.. "abey, ghar baithe hi yeh kaam hoga" ("Hey, you can do it sitting at home what I will ask you to do now"). And then he told me to register quickly as Indiblogger team has increased the seat number to 300. Wow... I signed in right then and registered. Punit did it as well.

And then THE SUNDAY came. It was a sunny morning and we had to reach The Grand Hyatt (near Mumbai University) before 12. This time Indiblogger team has taken confirmation from everybody as the event was hugely sought after by every Mumbaikar. We reached the hotel by 11:30 and entered the lobby. The preparations were still going on and Vinit (Indiblogger Teammate) asked us to wait for sometime. We were more than happy clicking pics at the lobby with a model of an F1 driver and THE McLAREN MERCEDES.

Then the time came to start the meet. It again started with the  "Hurr Hurr Hurr" tradition of Indiblogger and welcomed the Vodafone delegate to deliver a short speech. Other than some tricky questions about the performance of Vodafone and its customer care in Mumbai, the session went quite well. Kudos to the Vodafone representative (apologies, I forgot his name) for keeping his cool throughout the conversation. Then the regular "30 Seconds of Fame" by Indiblogger, this time also I was preparing something, but the chance never came. I am sure Punit will be agree with me! But Punit at least won two Pen Drives (awesome in looks, resembling the Vodafone Logo) and he gifted me one. Thank you Punit.

It was lunch time at around 2:00 in the afternoon, the lunch was lavish as usual and we enjoyed it a lot. I met Chirag and Venkat once again after the last Indiblooger meet at Taj.


After the lunch we entered the ball room and Mr Hamilton came to the stage. The entire ball room cheered with applause. Every eye was shining, every lip was smiling, every voice was cheering. Mr. Hamilton took a deep breath and opened his mouth: "Namaste Mumbai". Claps filled the room. Then the firing of questions started towards Mr. Racer. He answered all the questions including the silliest ones. And then the moment came when we were asked to leave for the long awaited event. We will witness the world famous tricks from Mr. Lewis Hamilton!! We left for BKC (Bandra Kurla Complex) at around 4:00 and then started another long wait for the event. Thanks to Indiblogger, we got to manage the best VIP seats with gears like a poncho, ear plugs, balloons etc. Bored with the wait I started clicking faces around me. It was really awesome to see the world and its people through the lenses which is generally not that exciting when we watch them with naked eyes. I shot a kid with great enthusiasm, a guy little bored, a girl visibly excited, another girl merged in thinking, a celebrity photographer tired of the day long event. 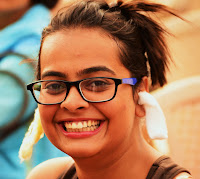 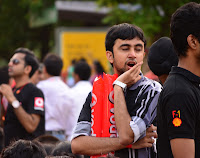 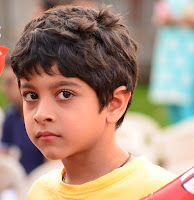 Around 7:00 PM the event started. It was a carnival kind of thing organised by Vodafone Speed Fest. There were balloons and colors and fireworks and clowns and men with long false legs and what not!! I just cannot describe the gala moving fanfare. It will dim the light and wipe out the colors from my mind if I try to pen down. After that a huge van with Vodafone ZooZoo and the hosts for the night Manish Paul and Mandira Bedi came to cheer the people. They announced the arrival of Mr Chief Minister and other ministers from the state cabinet. They formally declared the event to begin. And then we heard the noise, a disturbing sound which turned out to be the sound from the car we were there for. The sound got closer and louder, exceeding the cacophony and then we realized He just crossed us. A few seconds of instant numbness filled me, what was that! My ears are paining, a buzzing was there which is now an African Drum inside my chest, my eyes are searching for the car  to cross us again. And it did happen. It was at least 4-5 laps he did in front of the enormous crowd. It was just amazing, one of the best never-seen-before experience in my life.

Filled with excitement, joy and delight we started our journey to come back home. On the way back I was in a state of numbness, I could not talk much. And slowly I liked the game. Upon coming back to home, I had to share the experiences, pictures I clicked etc etc. but I was thinking of Mr Hamilton and other racers who can do it, challenging the speed of the air, probably the speed of the mind to intrude into thousands of hearts in exchange of such a dangerous, life-threatening task.

P.S.: I watched the Singapore Grand Prix on television the next Sunday converted into a racing lover.
Posted by Unknown at 13:05