Wine, Nokia and a Sunday Afternoon

"I live so that I can eat".... this one liner came to my mind when it was flagged off. I was nowhere up to the mark with the standard the crowd was having. Still I told to mysef it will be good enough if I present the words nicely, with a twist of my acting skills! But the chance never came... 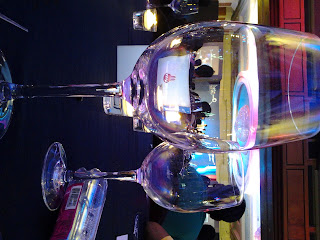 I was there at Taj Land's End for an event called "Nokia AppTasting" organised by Indibloggers. Punit, my friend, philosopher and guide in blogging world called me in the middle of the night to days prior to the event to tell me about it. I was excited since then. This one is going to be my first ever bloggers' meet, that too at Taj! Thought a lot about it for next two days and the time arrived. Almost rushed from an invitation to be on time. As we stay in Navi Mumbai, it is quite an hour drive to reach bandstand. We started at around 4 in the afternoon. We decided not to drink as I will be driving. But you know something...

The kick off was awesome. Though I didn't follow all the crazy acts, but somehow I liked the inner punch behind the "hurrrr" cry, within those hundreds of feasts, among those glaring eyes, within those priceless smiles. It's always a pleasure to watch people smiling... and I took that opportunity. Lucky me..

The hosts for the evening were celebrity maste chef Vikas Khanna and gadget guru Rajiv Makhni. "Witty Rajiv and Shy Vikas".. I must borrow the line from Punit to describe the duo in a simple way. But it was really a fun watching these guys in different roles. We were told to take a side with proper justification, either foodie or techie if we were called on the stage for the intro session. And then I thought of the first line of this blog. But the chance never came...

It went on, intro, random blogger pick up, quiz, wish-an-app, app tasting, instant questions, treasure hunt, culinary exercises and so on and so forth. But I never got a chance to come in front of the audience. Basically a backbencher is always a backbencher. And then only I thought why not to utilise the time in a different way. Why not to wear another pair of glasses through which I can see the people around me. I explored a lot. I met a guy who just quitted his job so that he can travel on his motorbike. I interacted with another guy who is an engineer, has a good job, holding a part time business and earning some money from his blog posts too. I made another friend who was in banking, but considers himself a thinker. I met a lady who helps Punit for his blogs, two guys from IIT, one techie another being a would-be-MBA. Even got a greetings card from 21 Fools and the guy told us not to keep it but spread the "awesomeness" of our beloved one through that card. Had a chance to talk to one of the stalwarts of Indibloggers, and had chances to enjoy sula with mutton curry in a Taj Ballroom. Enormous crowd, shining chandeliers, humorous hosts, equally witty audience, energetic organizing team and last but not the least the venue.. It was an experience of its kind in my life. Thanks to Indibloggers 5th birthday celebration and the app tasting event, I enjoyed my lazy Sunday evening in a mood that I wanted to, within an ambiance which I loved like anything, among those people whom I could connect. And there came my wish.. "Nokia.. can you create an app which will search a friend in its proper sense when I am alone, down and have nowhere to go?"

For more pics of the event, you can check this: